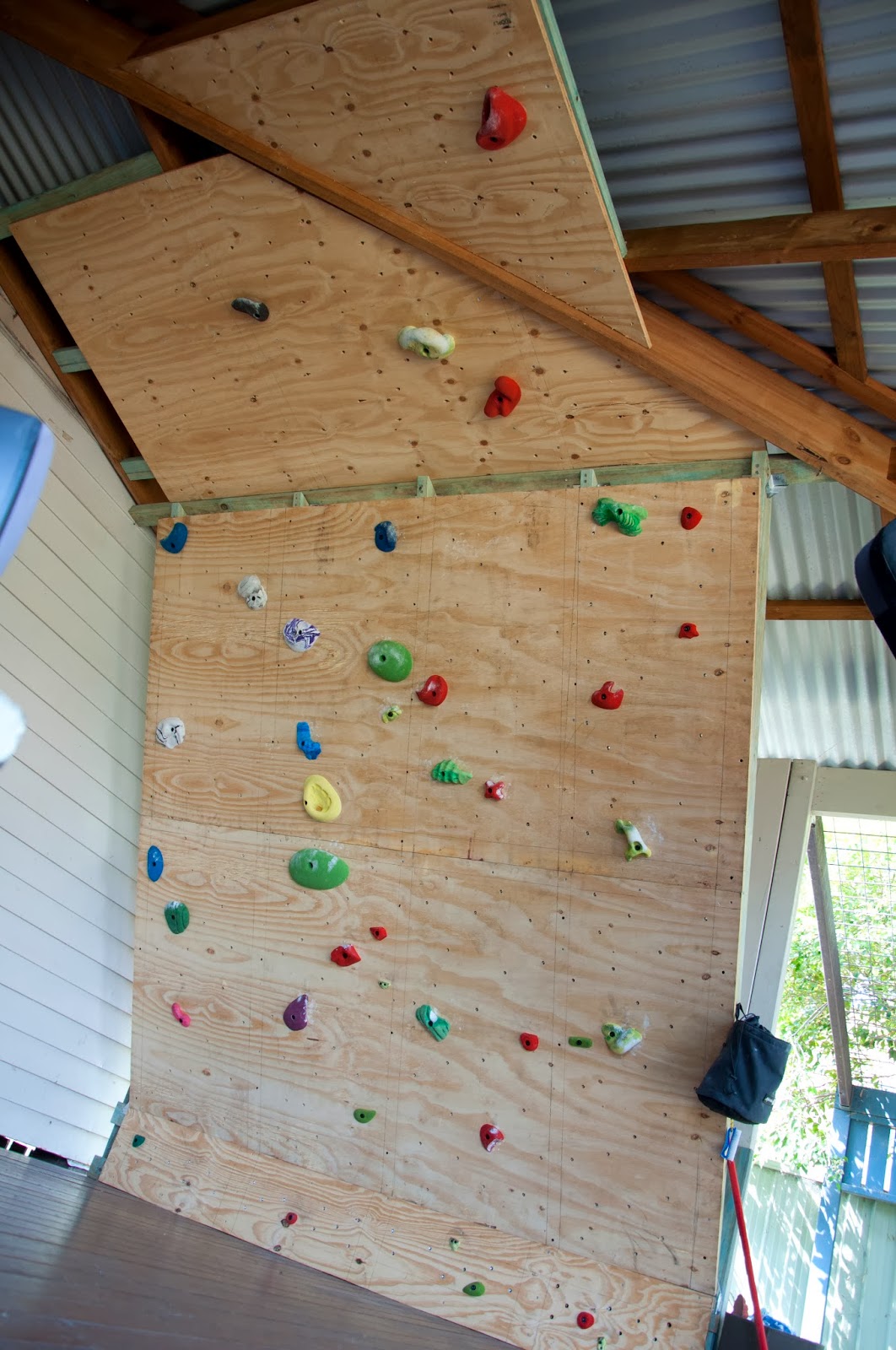 After another weekend of cutting, drilling, and hammering, our home climbing wall is finished. Our friend James loaned us some of the specialized equipment and materials, as well as a bunch of the holds, which was a huge help. Thanks heaps James! 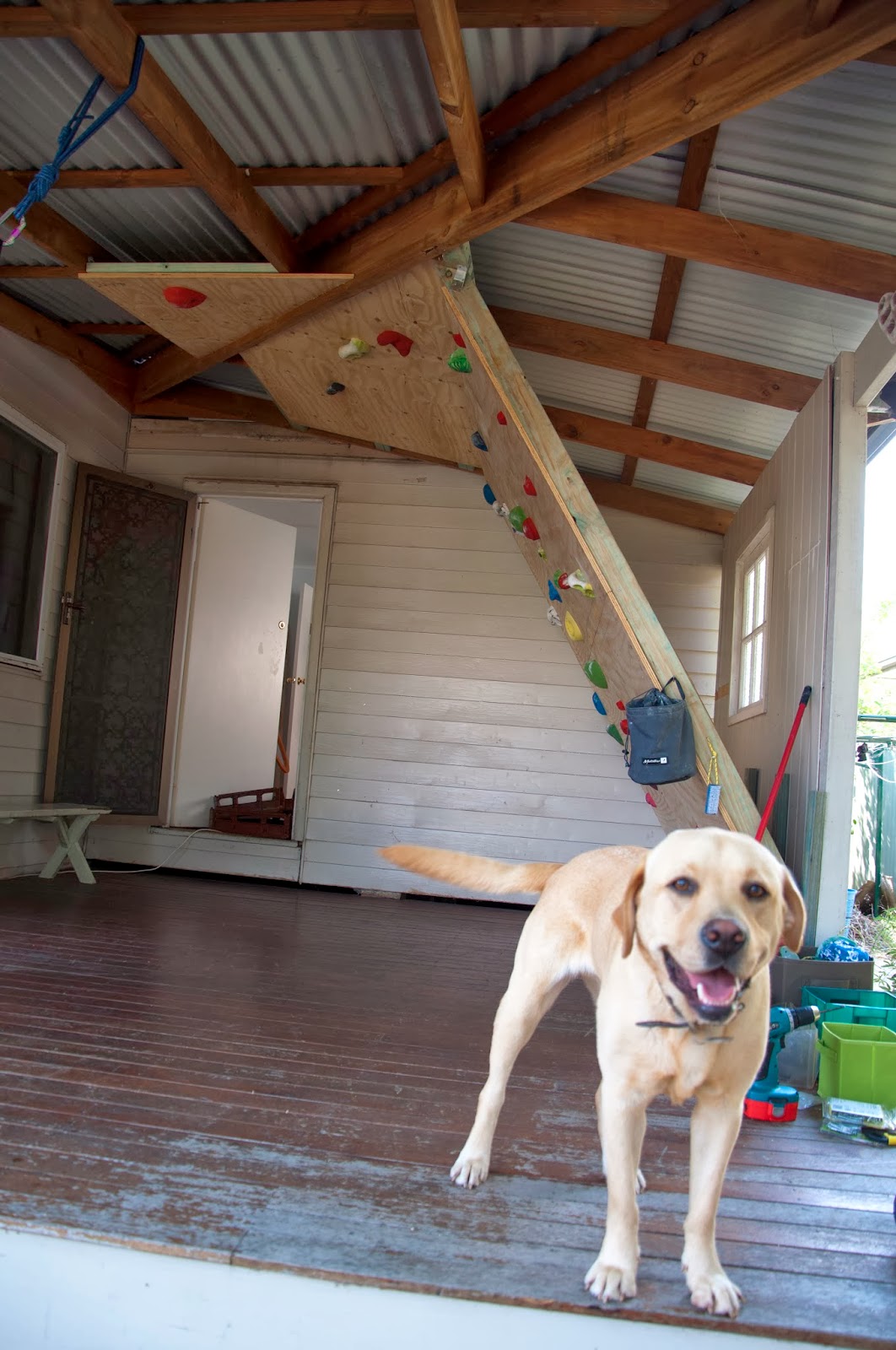 We added a ~1m roof on top, mostly because it was easy to do with the framing all ready in place. Carrie and I are relatively weak at climbing roofs, so this will give good practice.

Here are a few more photos of the construction: 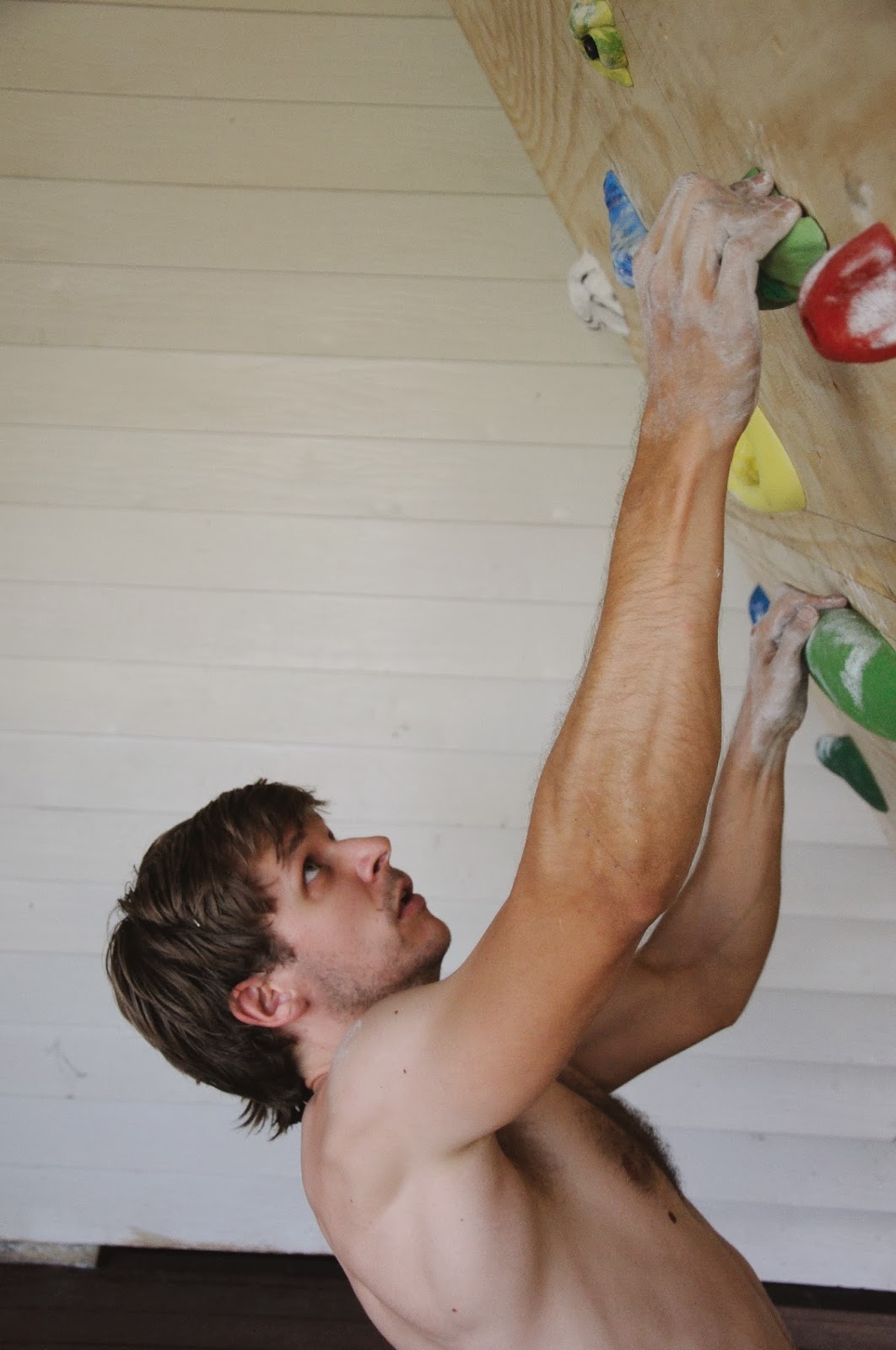 Posted by paintcolor at 11:21 PM No comments:

Adventures in Climbing at Home

John and I are building a climbing wall at our house. Yes, we have the coolest landlord in the world. Here are photos of stage one of the building process...

Our wall is going to have a vertical foot board at the bottom, then a 30º section that goes up to a small roof, which is nearly horizontal. 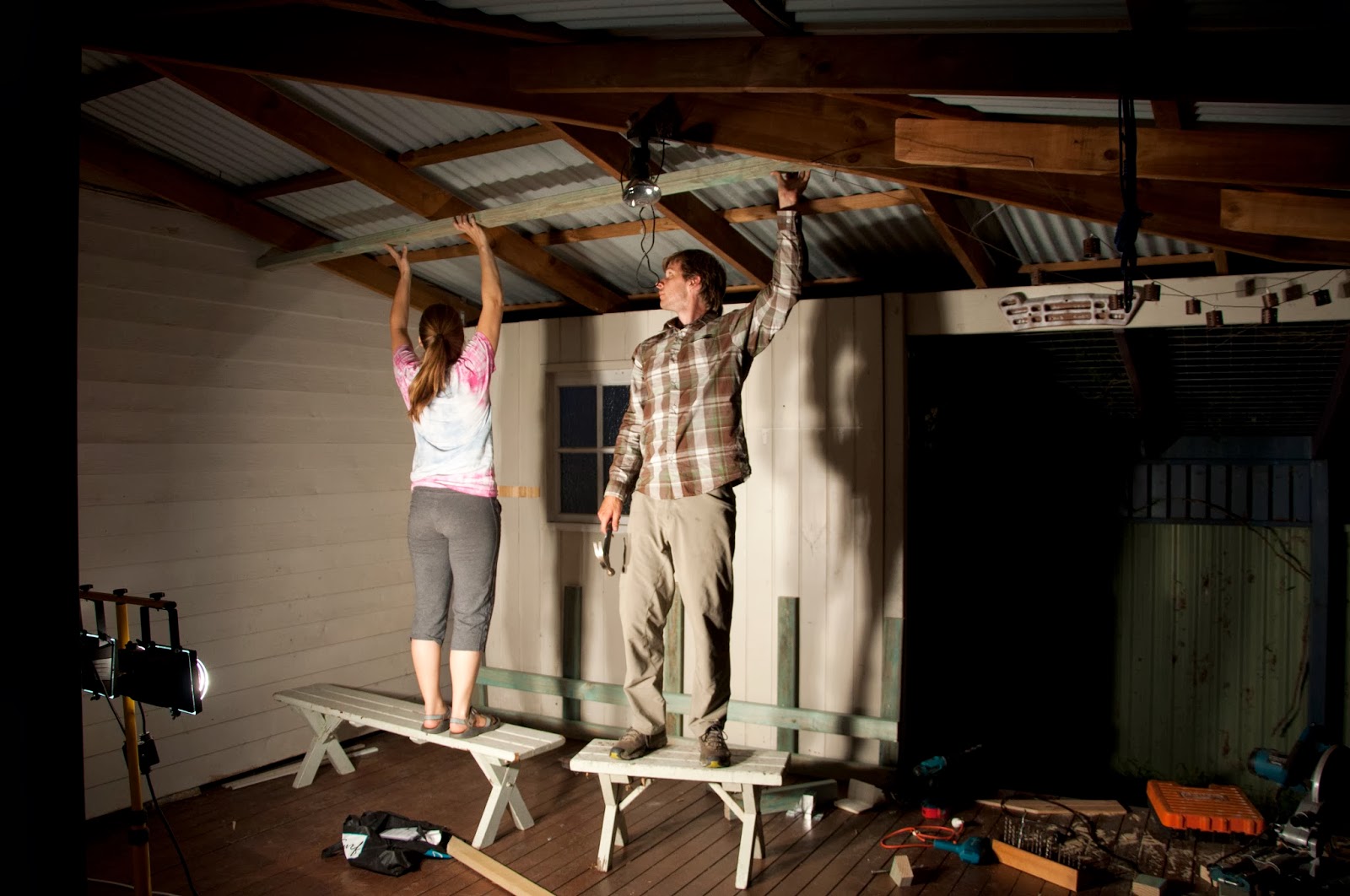 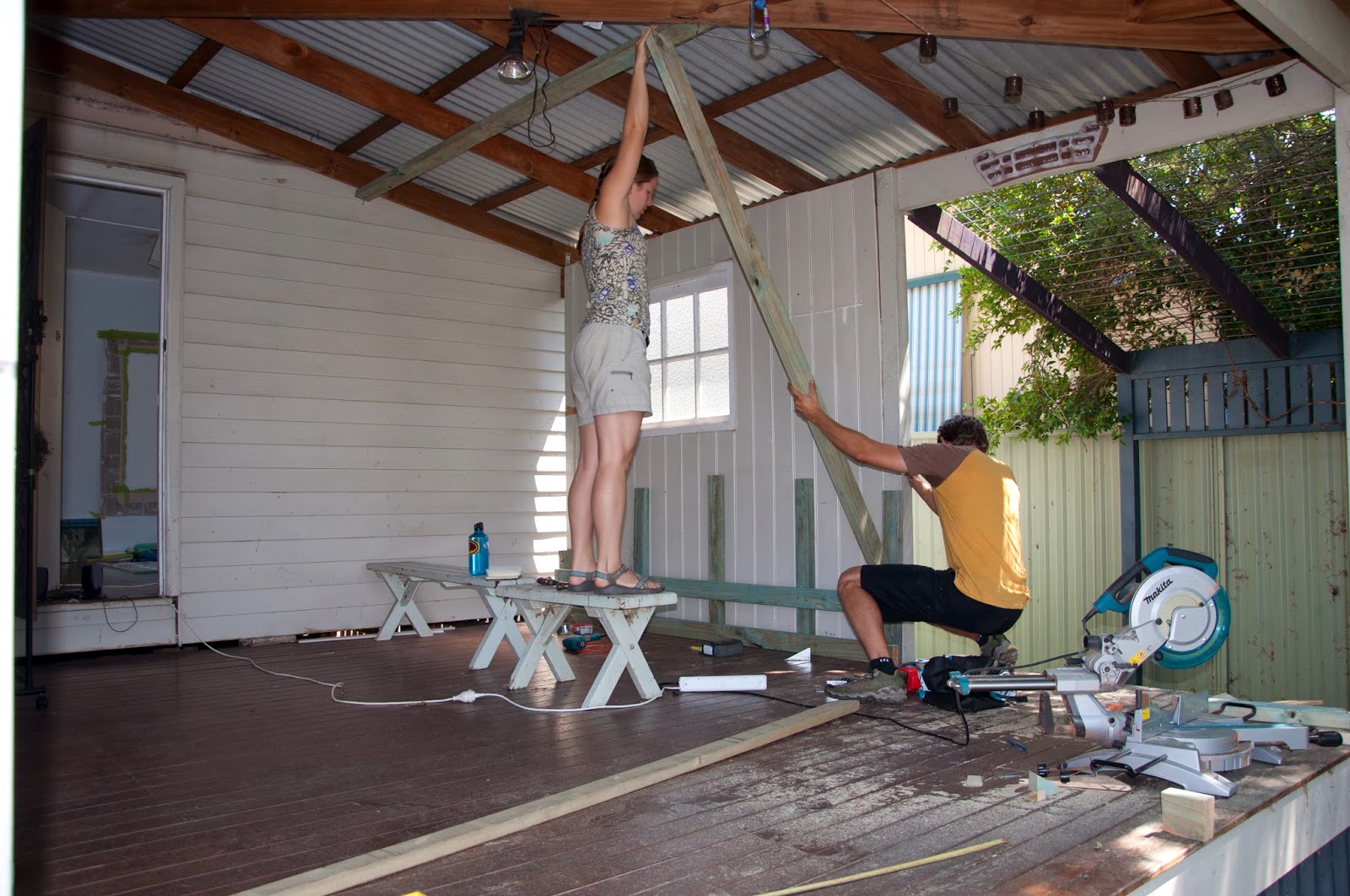 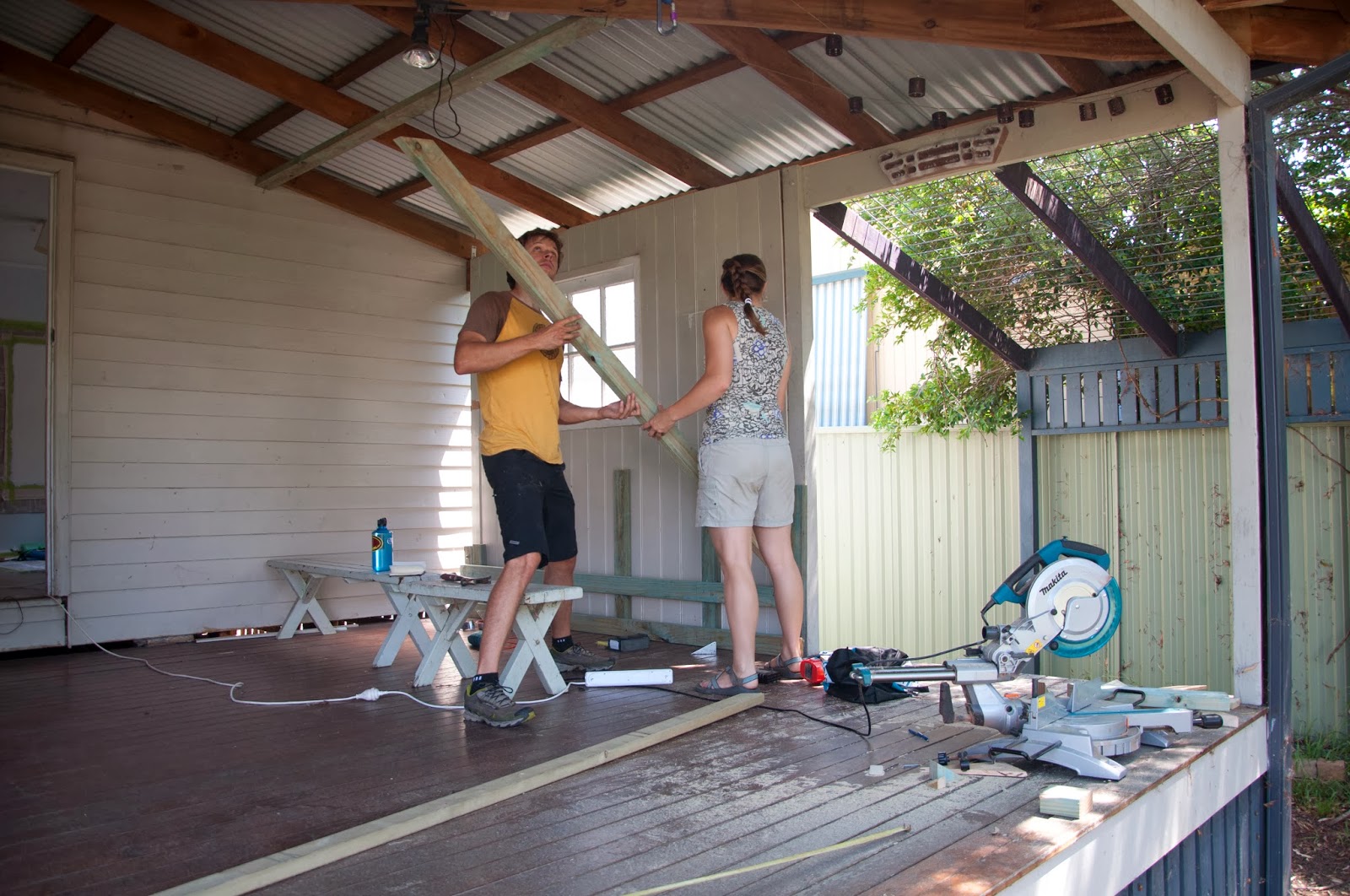 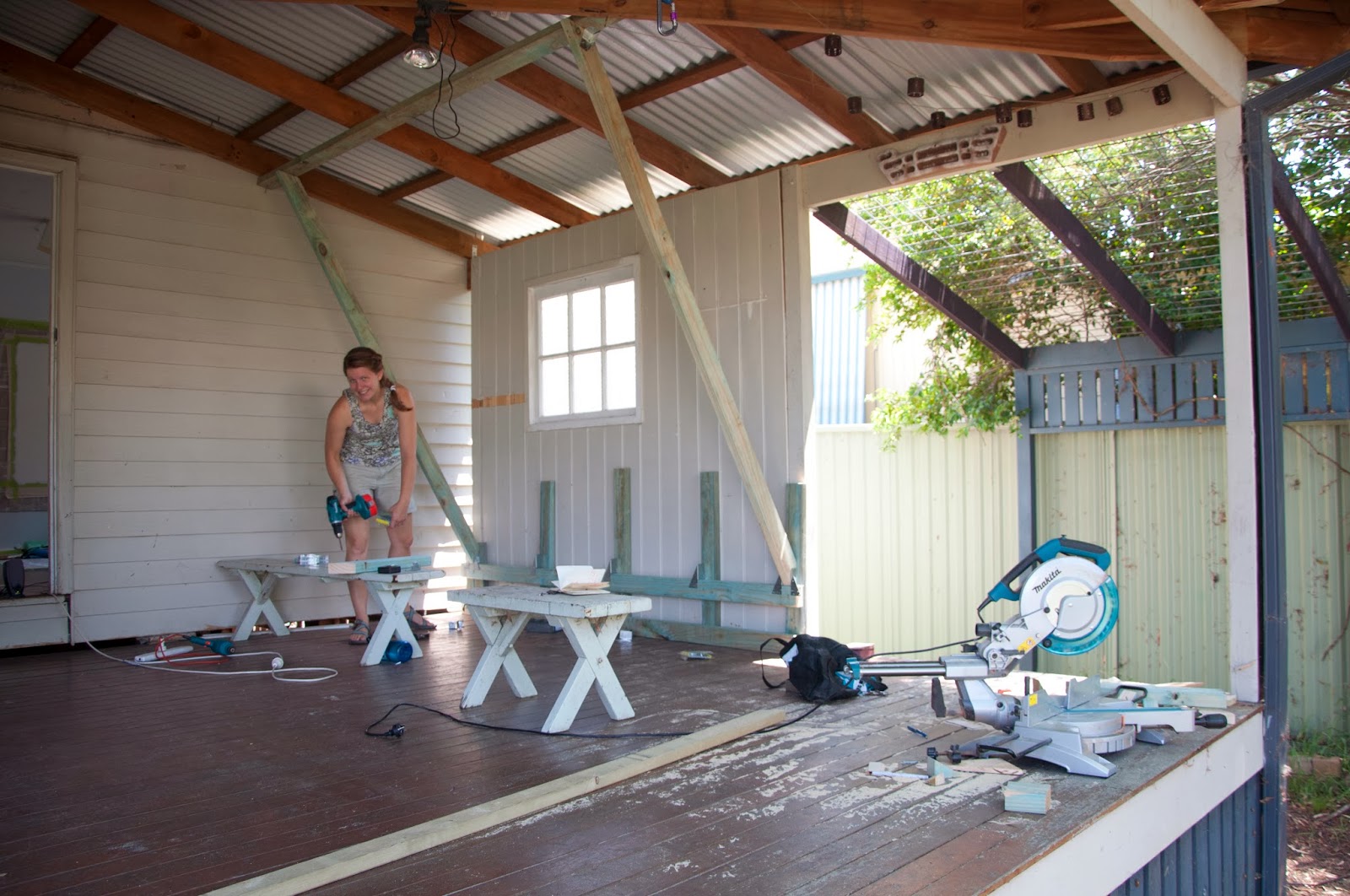 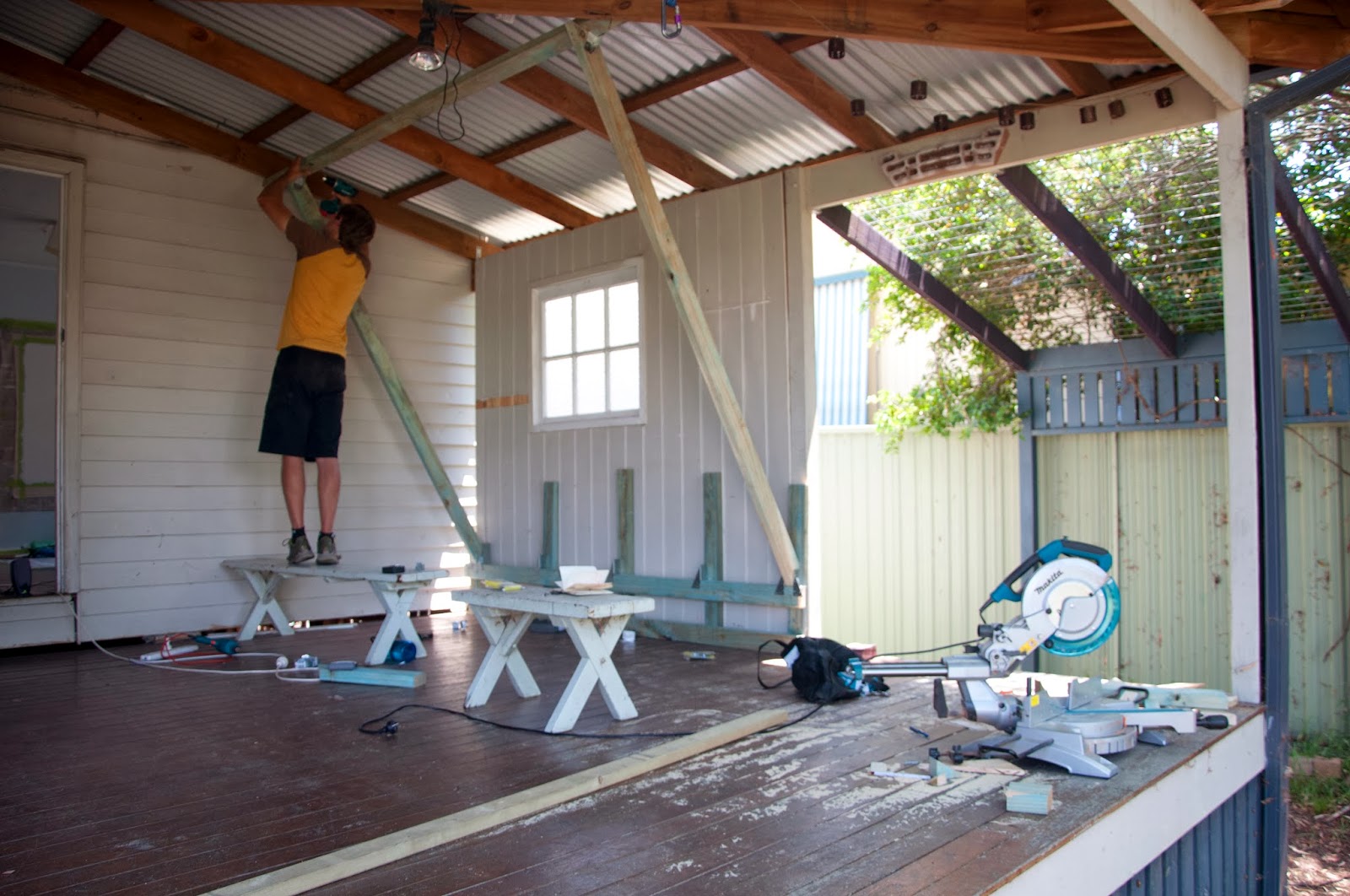 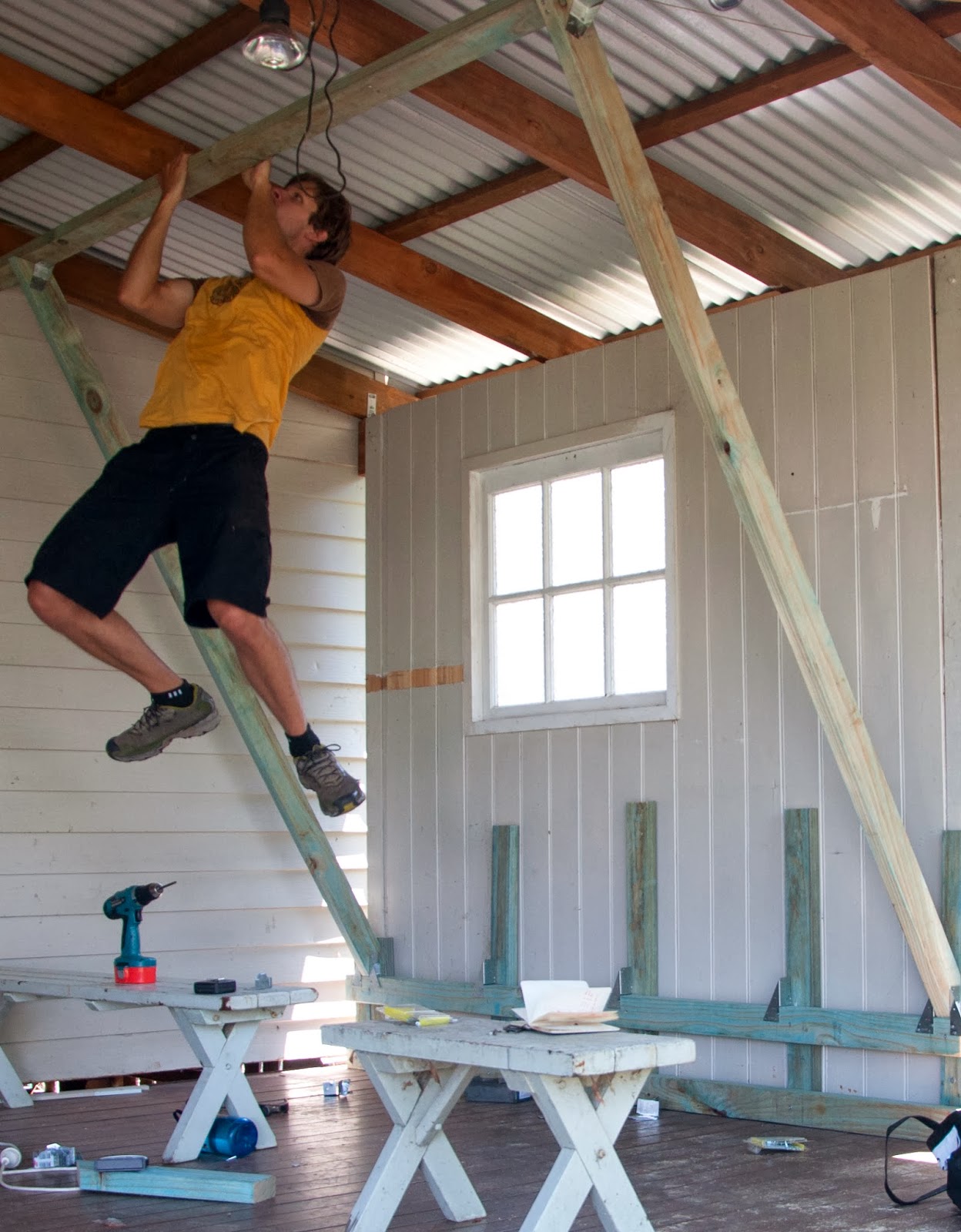 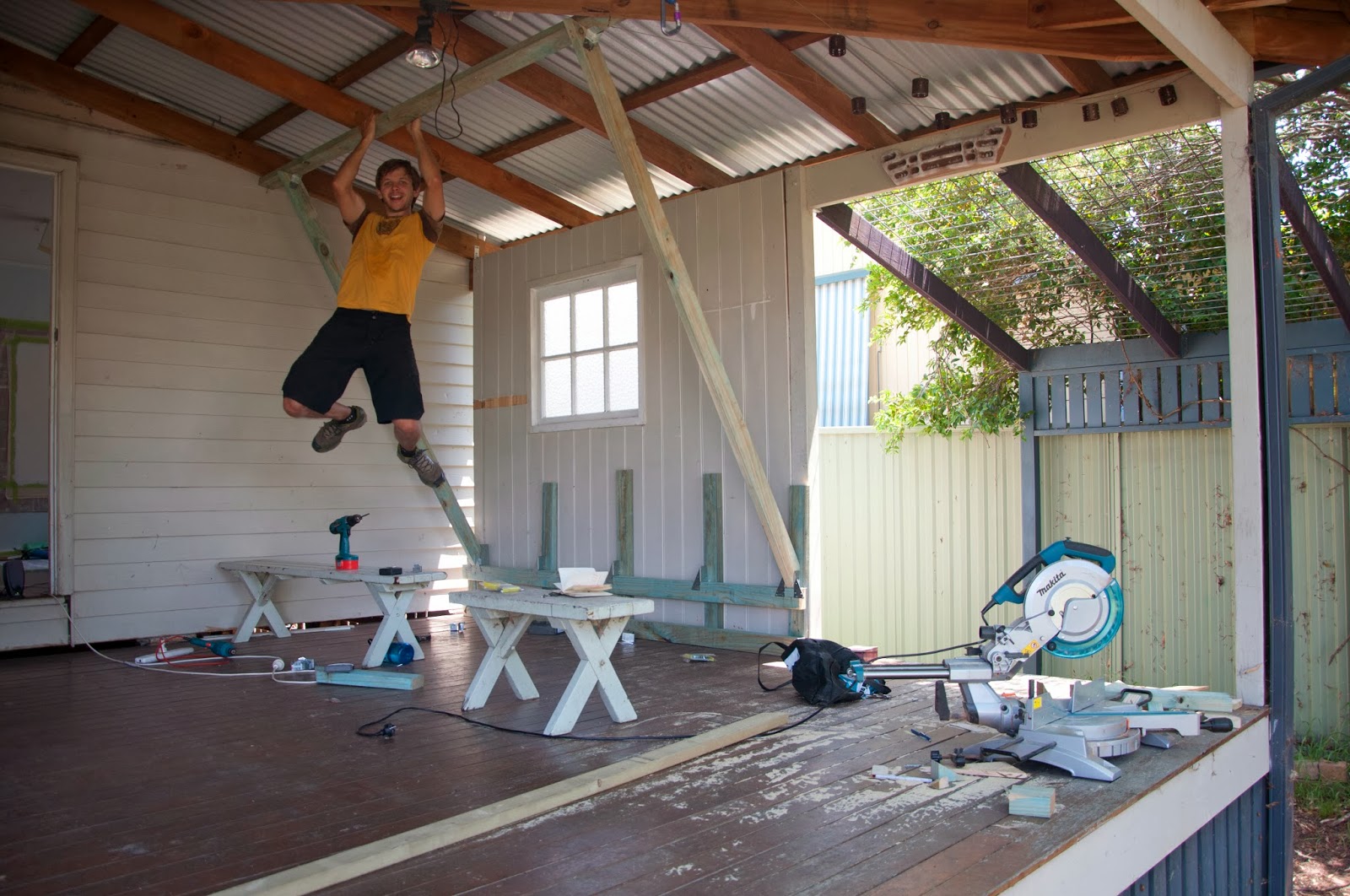 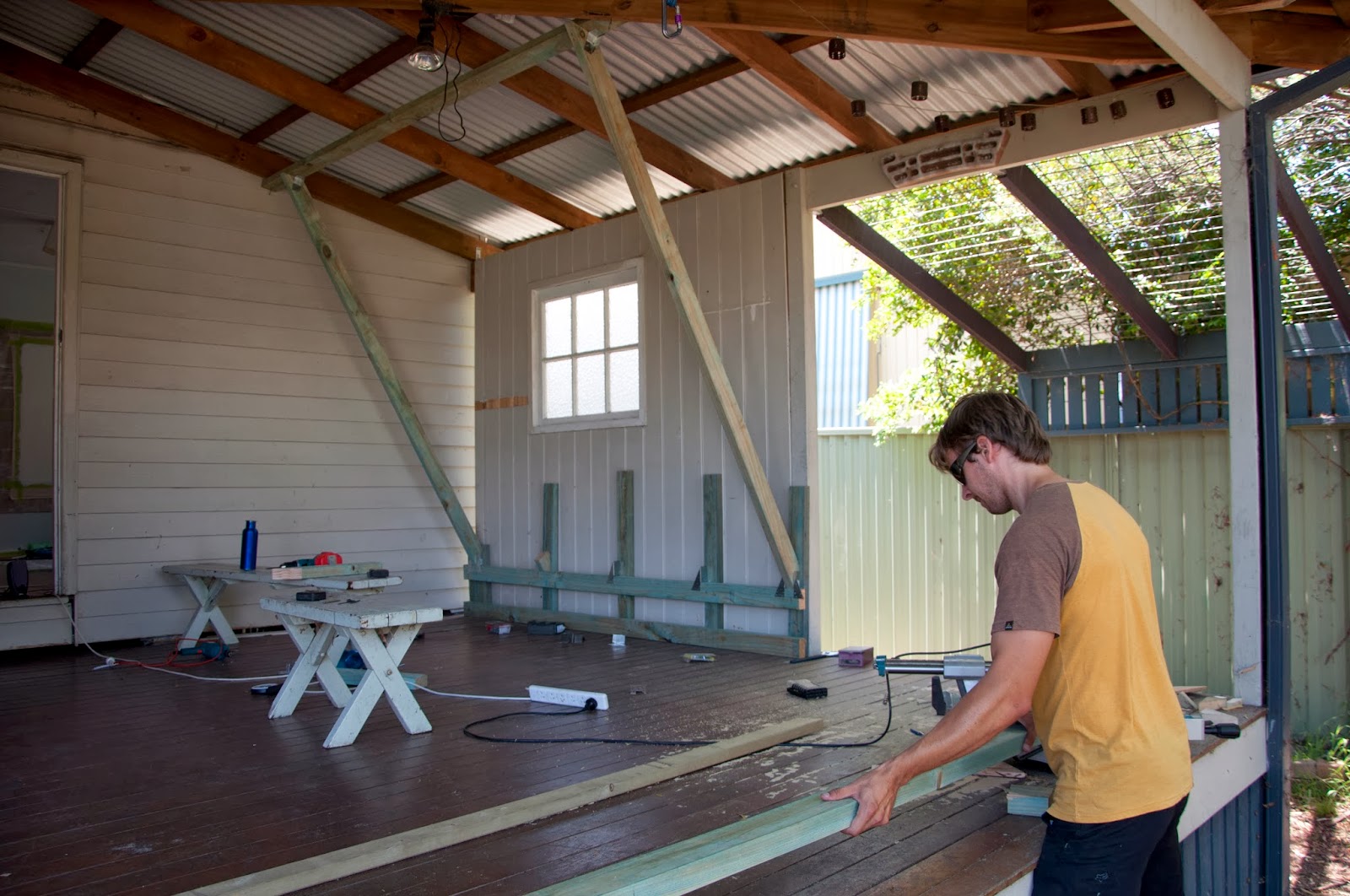 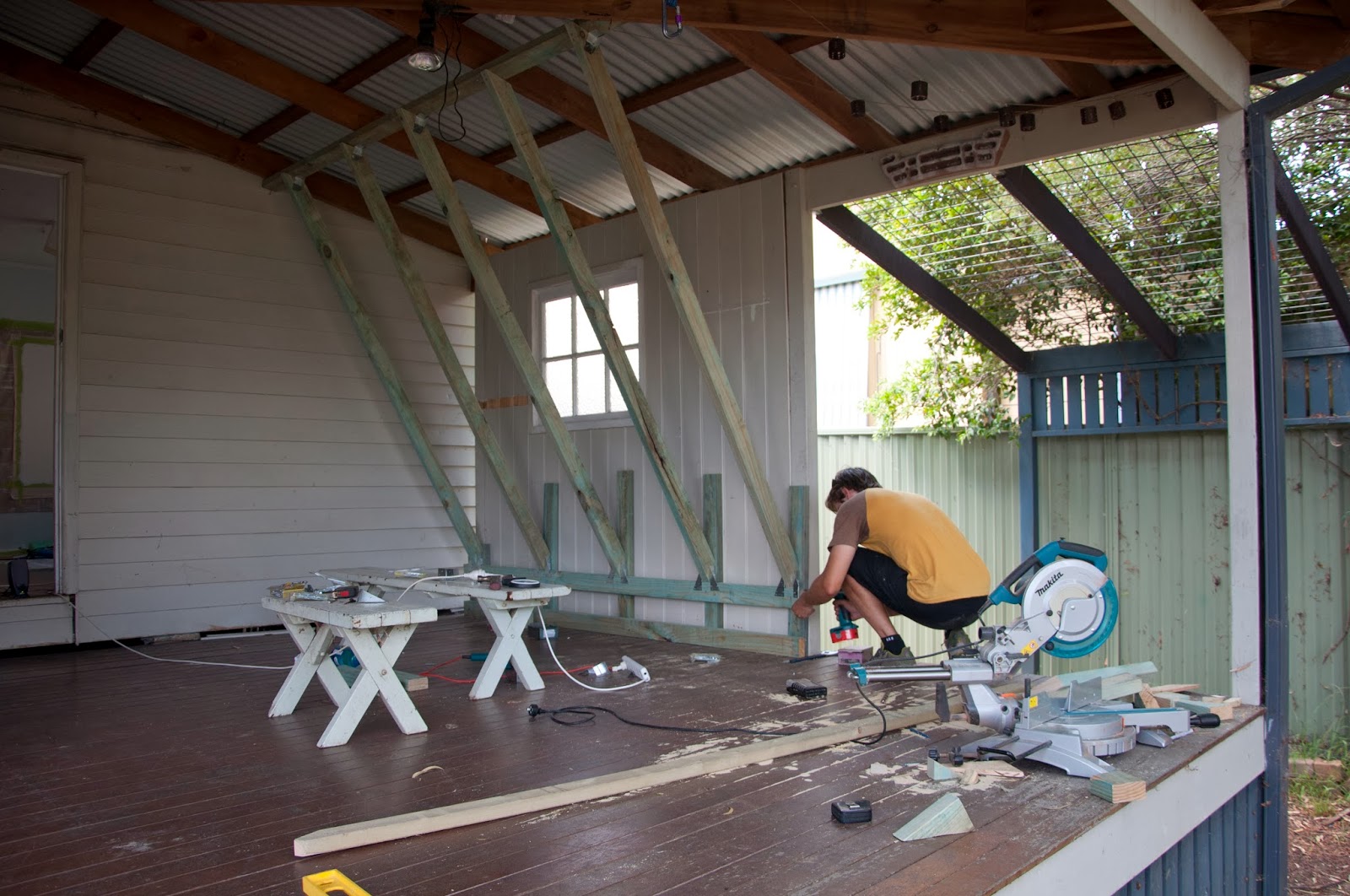 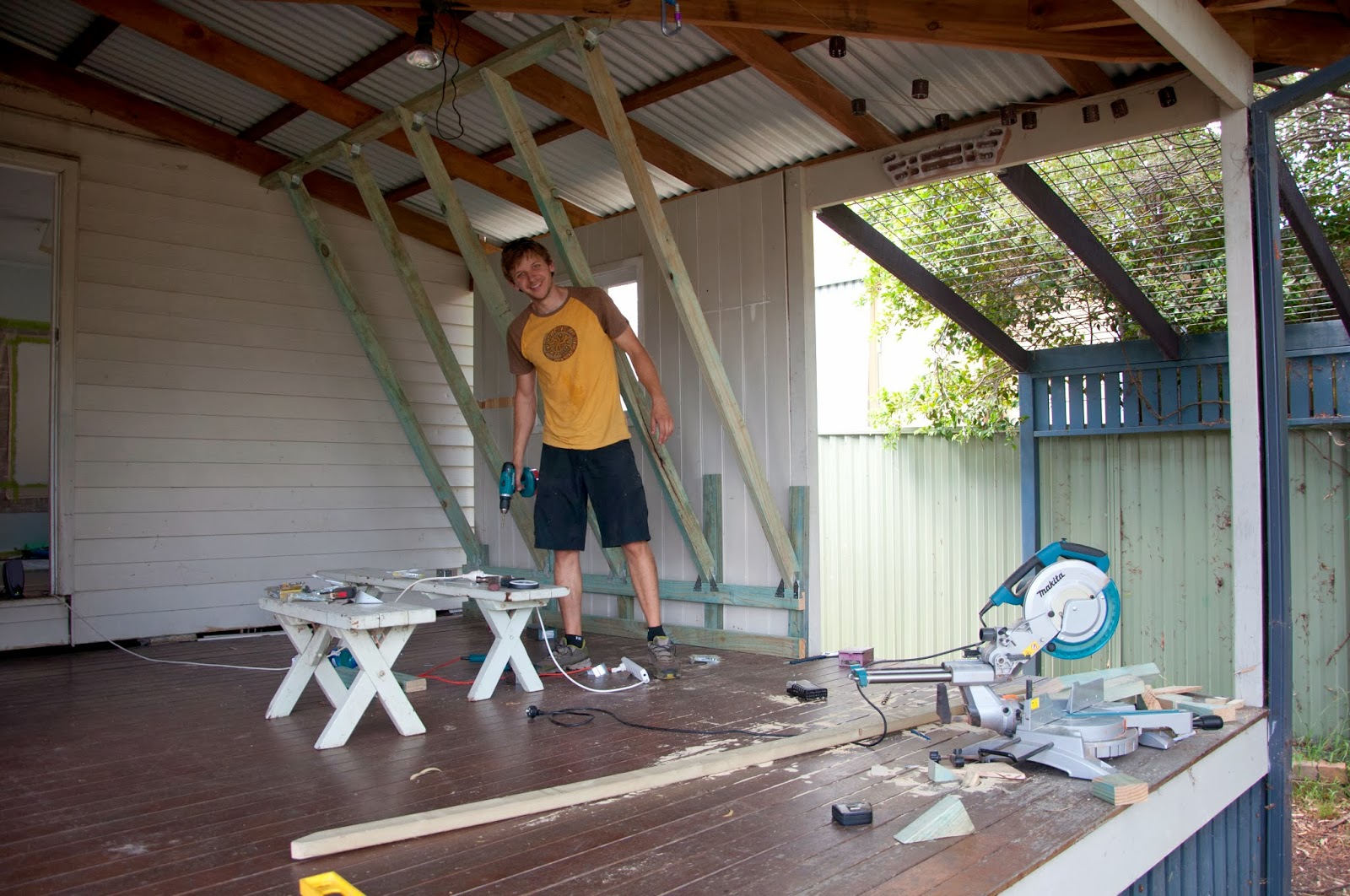 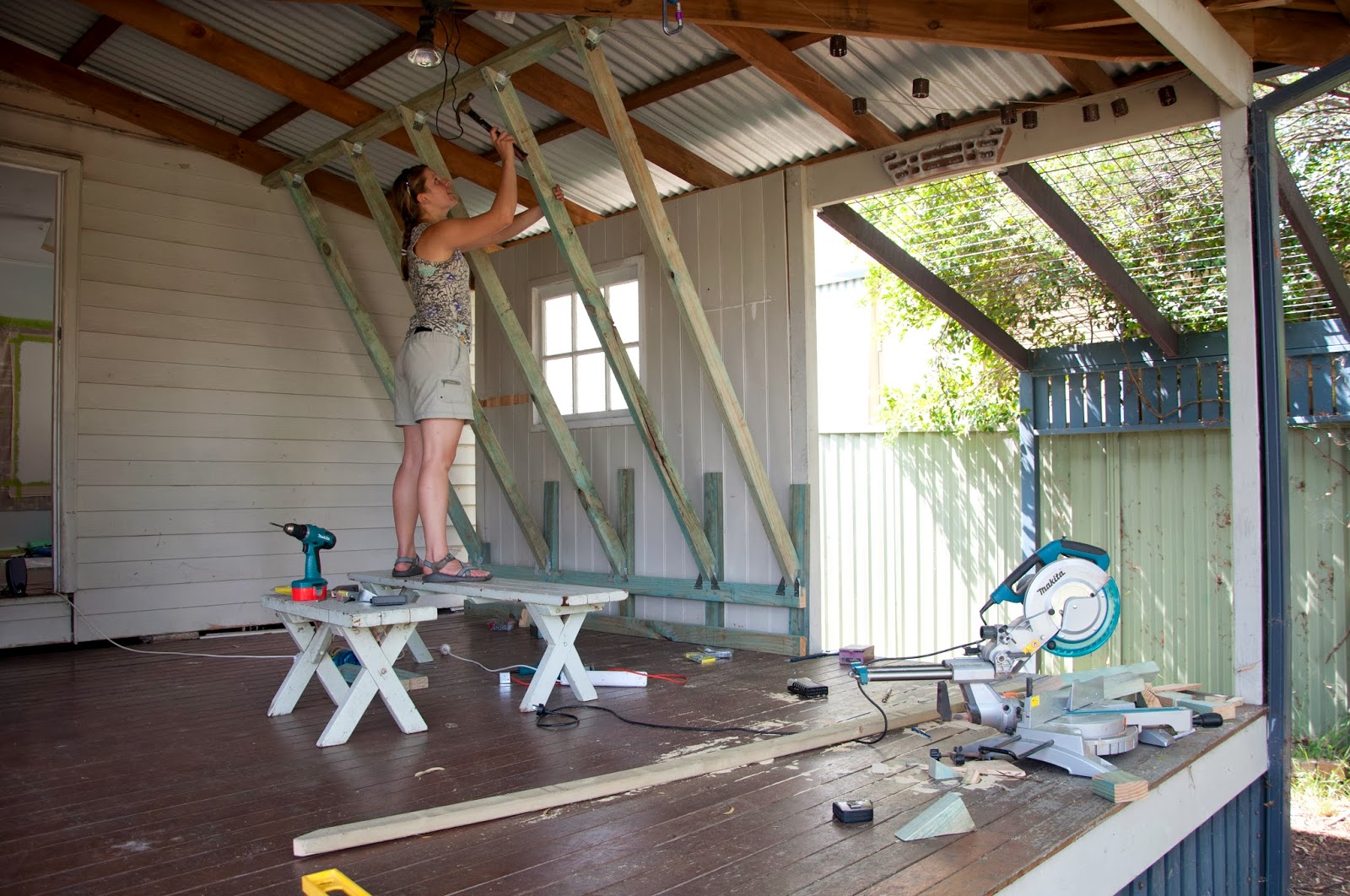 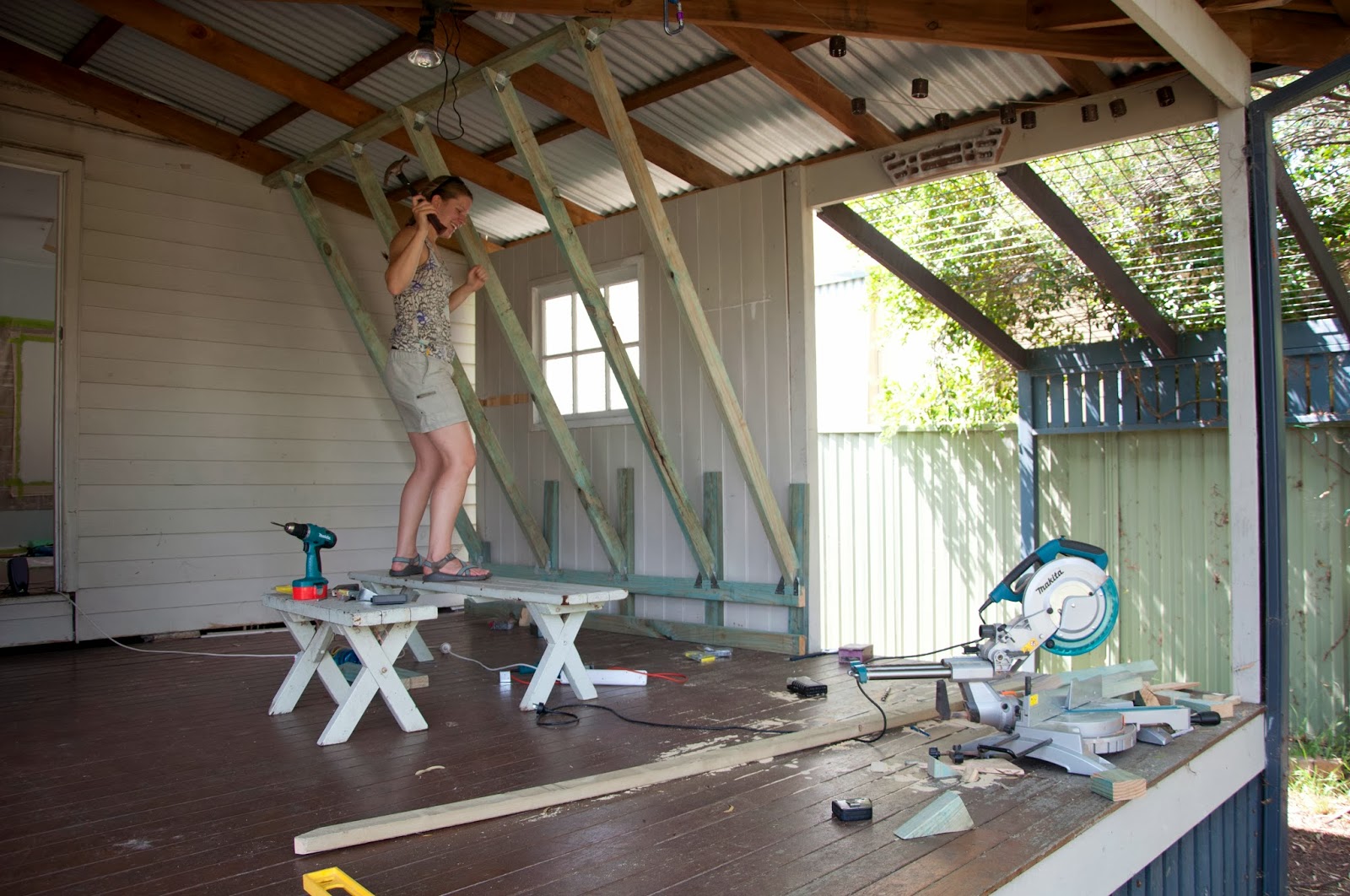 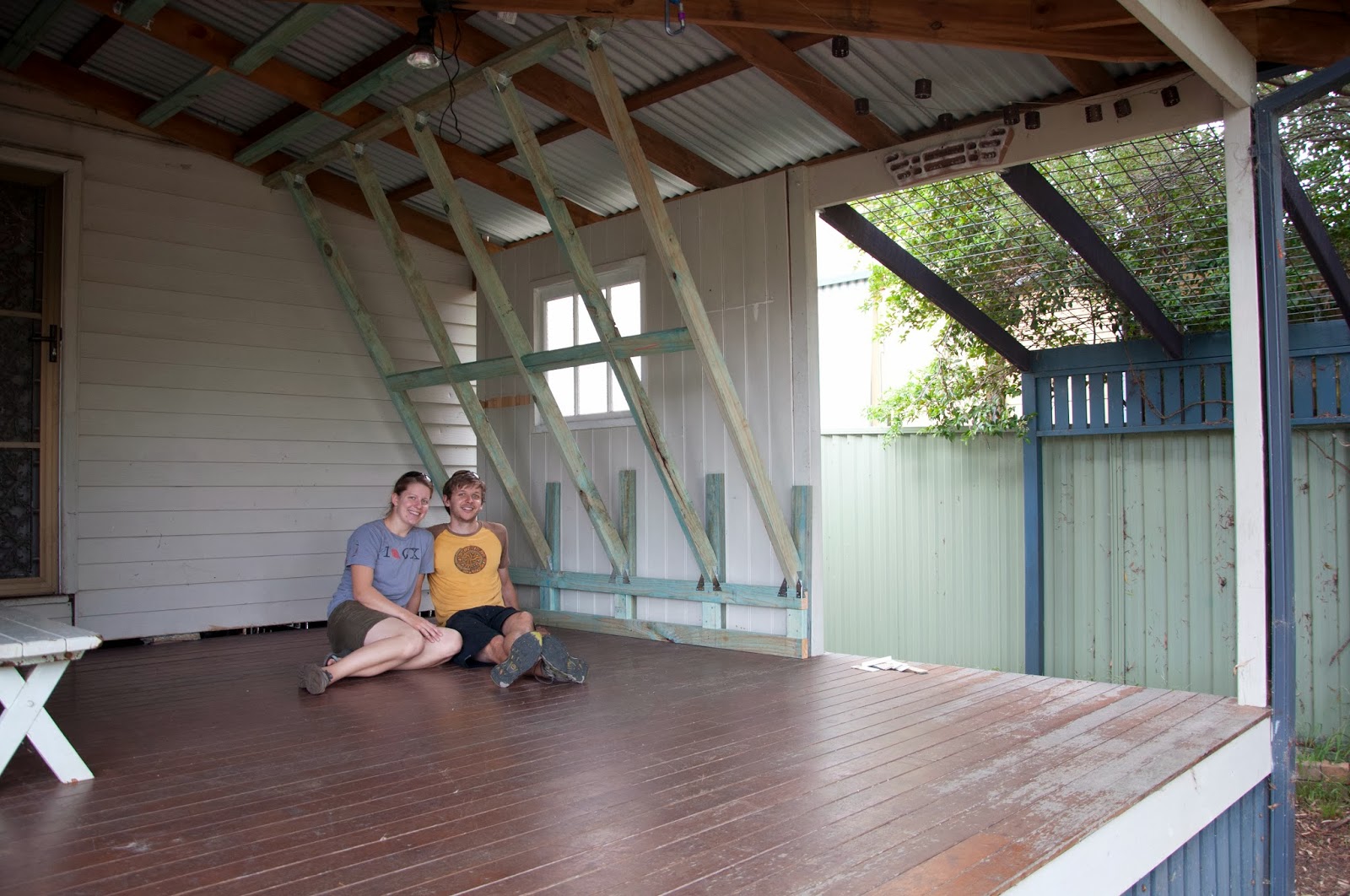 John and I are still smiling after a day of building. Our roommate was pretty sure that one of us would be sleeping on the couch after a long day working together, but we made it. :-)

Posted by paintcolor at 11:11 PM No comments:

About a week ago, John and I decided hat we should try to make our own Thanksgiving dinner. Our families are far away, but we still wanted to feel a bit of home by attempting to make all the classic Thanksgiving dishes. First things first, I had to make a schedule for the days cooking. I knew if I hadn't that we would most likely eat potatoes for an appetizer (entree) and rolls for dessert.

John had to work on Thursday. He wanted to come home and help though, so I emailed him this timeline. His response was Holy Cow!!!! The preparations actually began a few days in advance. To our Aussie friends, I assure you this is quite normal.... I made a total of 7 trips to the grocery store in 4 days. The thrift store (opp shop) was good to me this week with some fantastic serving dishes. So enough writing... Here is the photo log from the two days.

John helped cook a whole lot, unfortunately we don't have any pictures of him in the kitchen.... He left work at 3:00 on his bike to get home and help. Unfortunately he got a flat tire. It is a good thing he carries a spare bike tube with him at all times. Then he got another flat tire.... Do you carry around two spare tubes? Neither does he. So he walked to the nearby train station and got home an hour and a half later :-(. It should've taken him 20 minutes to ride home. Despite all that, he came home ready to work!

Dinner was in the oven and we needed some air-conditioning. Now I know why Aussies actually don't celebrate Thanksgiving. Forget the fact that it has nothing to do with their heritage. It's because November is freaking hot! 32 degrees C (~90 degrees F) with the oven on all day, it was brutal. So we gave in and turned the air-conditioning on for a little while 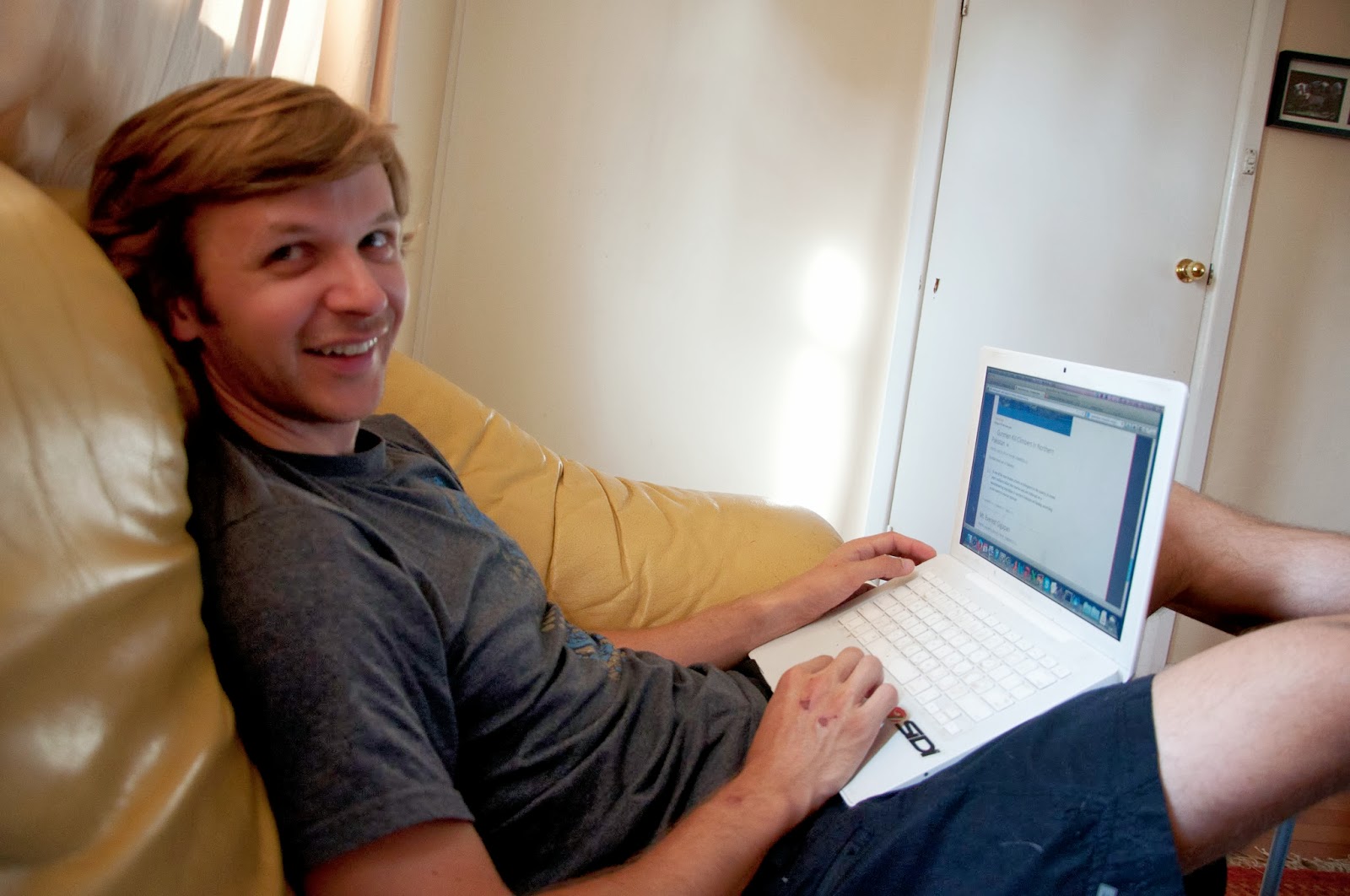 This definitely wasn't the Ramig/Carlson or the Drake celebration that we have come to know and love, but we had a fun evening. I am not sure Michael, our roommate, understands the holiday anymore than he did before; but he enjoyed an excuse to eat a tone of food! Everything surprisingly turned out delicious.... except for that pesky pumpkin pie! Next year John gets to make it. 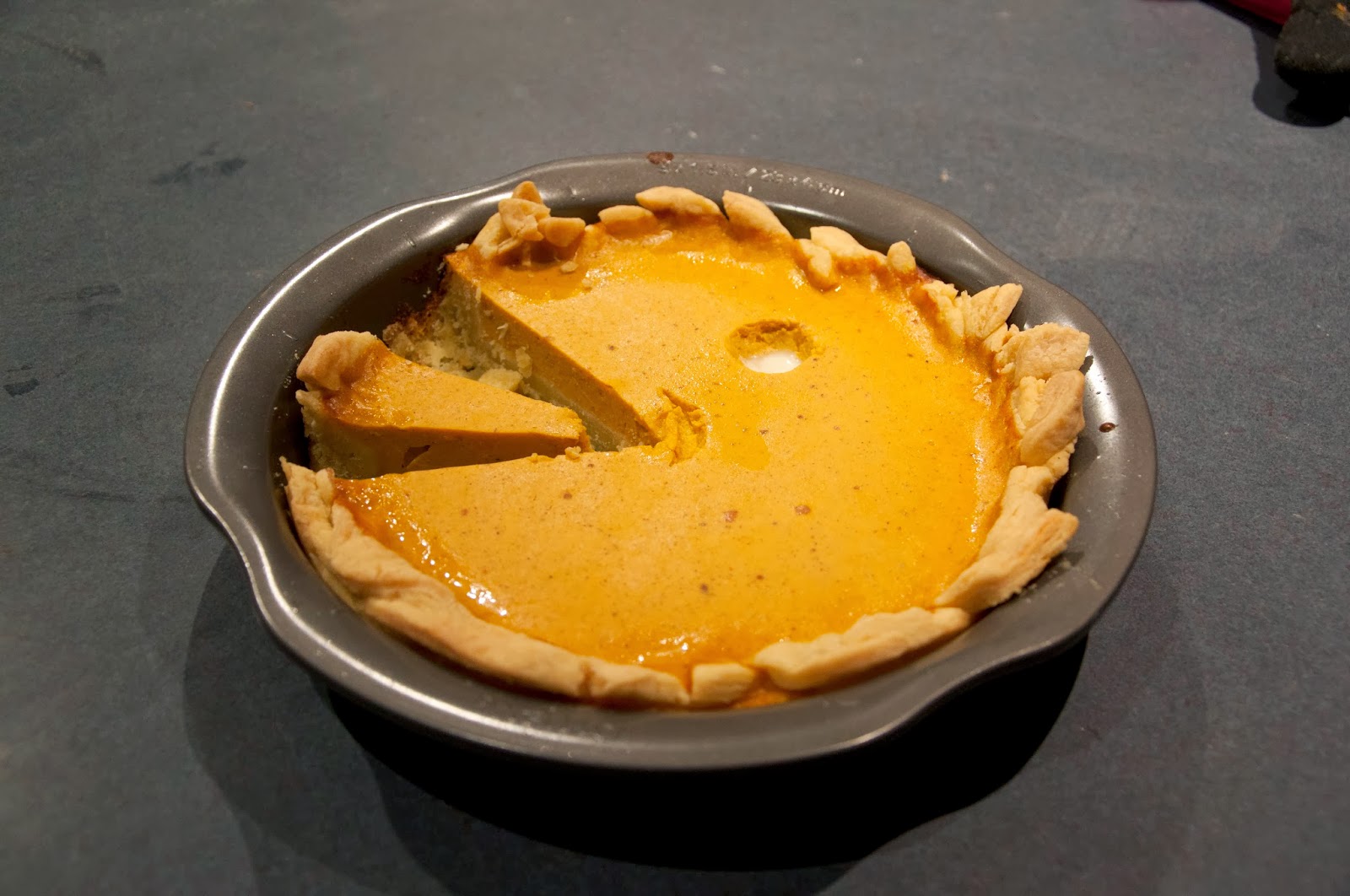 Camping and Climbing trip to the Wolgan Valley

Carrie and I took off for some camping and rock climbing over the long labour day weekend. We went to the Wolgan Valley, which is a wilderness area on the western edge of the Blue Mountains, just a few hours drive from our house.

The Wolgan is like a smaller version of Yosemite- it's a giant wilderness area, but most everyone visits a central valley and camps along a river surrounded by large cliffs. It's a mini-mecca for climbers and hikers, but the valley fills up with picnicking families. If you squint, you can pretend you're in an alternate Yosemite, with eroding sandstone cliffs instead of granite, kangaroos and wallabies instead of bears, and kids on motorbikes instead of the Yosemite valley traffic.

The only reason there is a road into the Wolgan is that there was an extensive series of coal and shale oil mines in the early 1900's. There is a series of industrial ruins from this activity that are now tourist attractions: ovens where the coal was made into coke for the steel industry and processing plants where things like candles were made out of the shale oil. If you like looking at piles of old bricks, this is the place for you.


There's a lot of abandoned old crap, including some cars.


We set up camp, and excitedly took pictures of kangaroos and wallabies. They were everywhere. 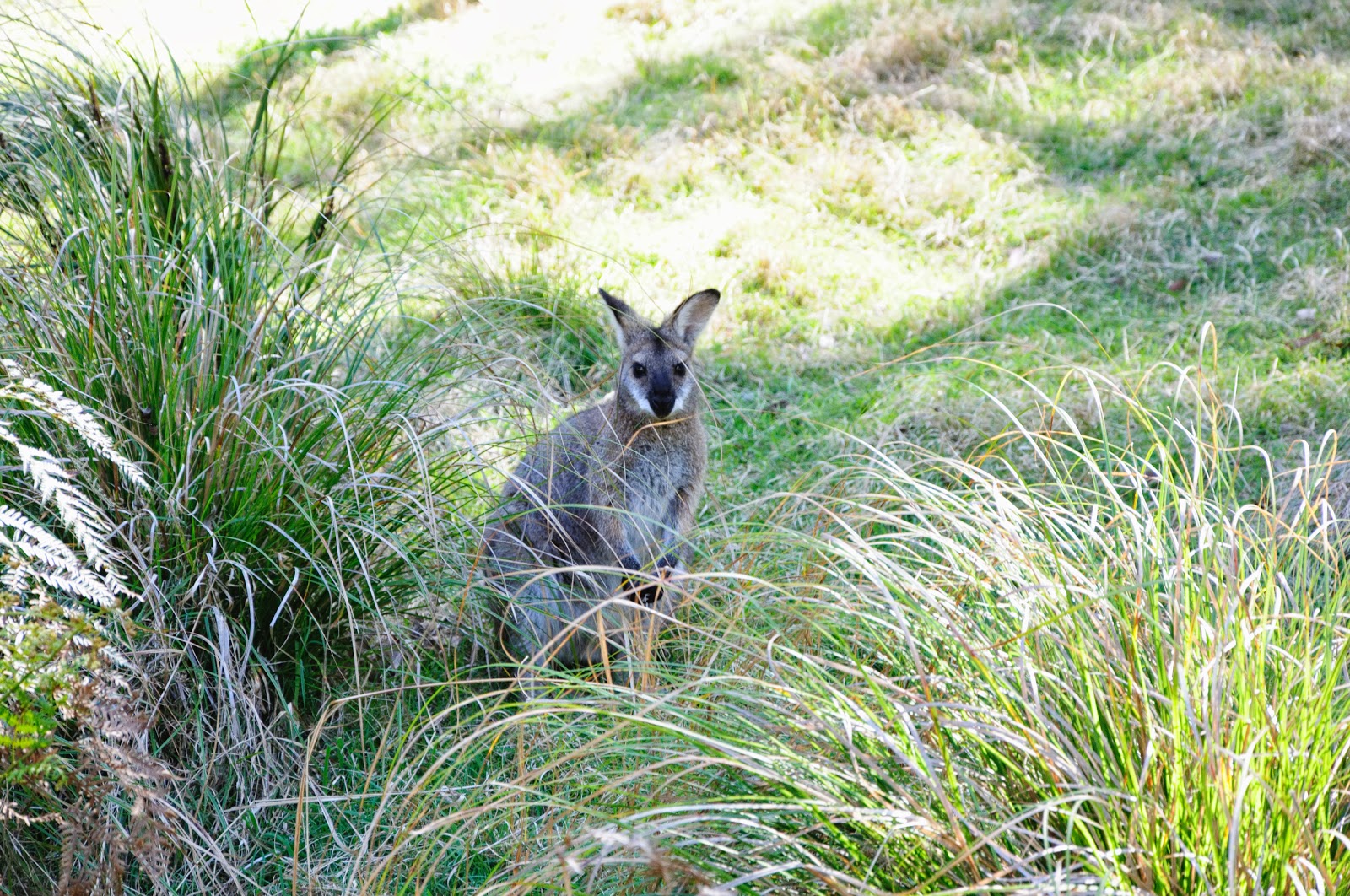 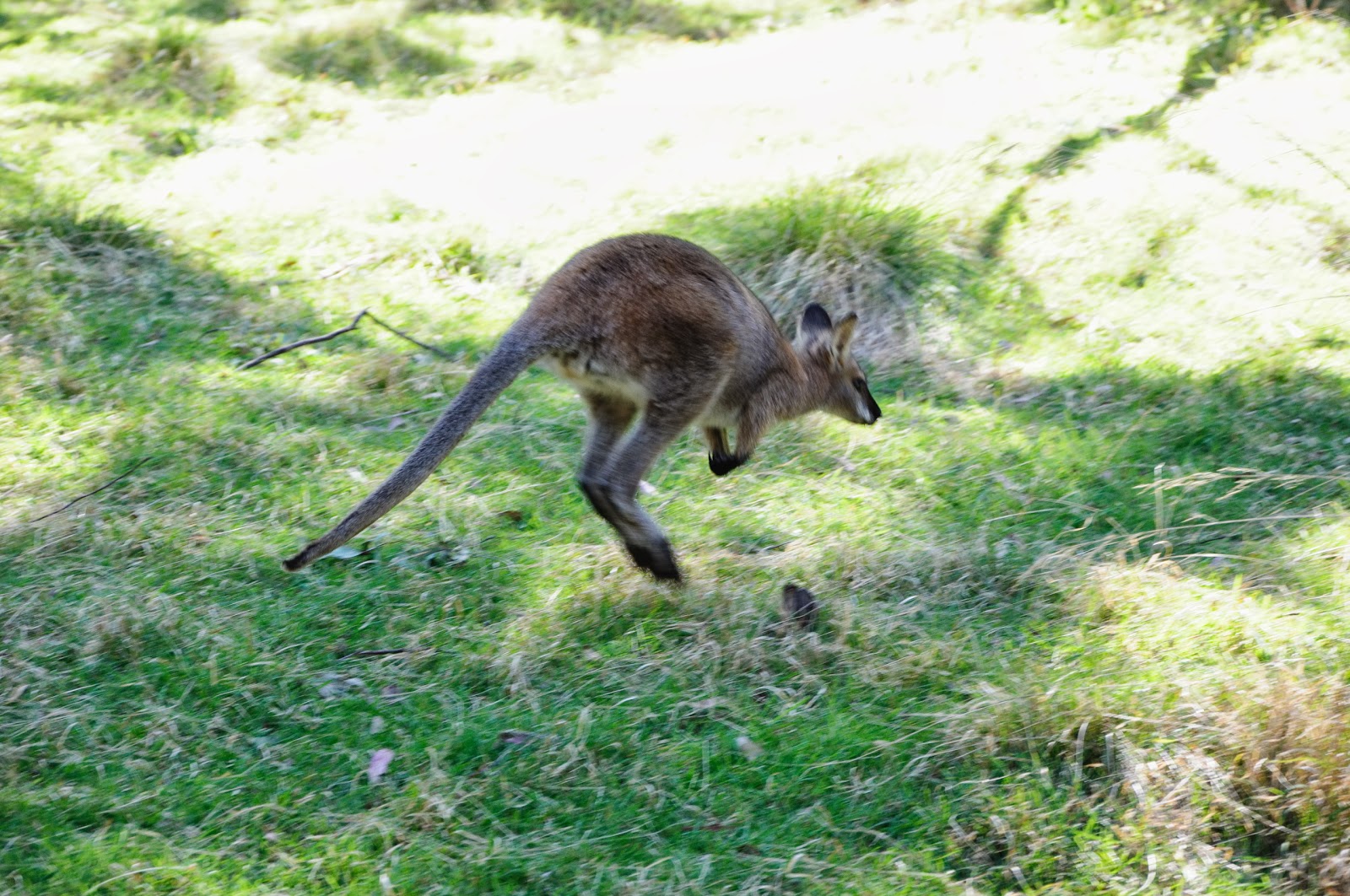 If you couldn't tell, I was less than impressed by the ruins- I was excited about the rock cliffs. I particularly wanted to climb the largest and most prominent cliff in the valley, Old Baldy.


I set my heart on climbing a famous old route called Excalibur, first climbed in 1968 by John Ewbank, the granddaddy of Australian climbing. It climbs right up the guts of the upper cliff of Old Baldy, and it's the kind of prominent headwall route that fills climbers daydreams with thoughts of glory. Carrie was up for the adventure, but this climb was rated grade 18 (5.10b ish), which is near her comfort limit, and it was going to be a long day of climbing on an unknown (to us) route. So we made a deal- I would lead all the pitches and haul our small bag so that she could climb each pitch without any extra weight.


Before we could even attempt the climb on the upper cliff, we had to get to there. We climbed a route on the lower cliffs called Secret Swinger- a nice looking corner crack.

After two pitches on Secret Swinger and a bit of a scramble up the halfway ledge, we found the start of Excalibur. For a grand line that climbs straight up the guts of an impressive headwall, the first pitch leaves a bit to be desired. It's a crummy looking sandy corner, with one hard move to gain the belay ledge. Carrie described it as a vertical sandbox.

However, above the layer of poor rock was a beautiful headwall of good rock split by an obvious crack. I giddily jammed my way up, enjoying the experience of plugging nuts  and hexes into placement after solid placement. There aren't any comfortable belay ledges on the route and I started running out of gear after about 40m, so I built a semi-hanging belay and hauled our bag with the tag line. We weren't carrying much besides some water, snacks, and survival stuff (rain gear, topo, compass, etc.), so hauling the bag was easy.

After another long pitch of enjoyable crack climbing and a dirty slab at the top, we were on the summit. We enjoyed the views and the feeling of solitude, despite the hordes of campers and motorbikes in the valley below us.

Time to descend. I'm wary of abseiling unless it's really necessary- I suppose I've read too many accident reports. Too many experienced and competent climbers have died in abseiling accidents because of small lapses in judgement. We topped out at 3pm so we had plenty of daylight, so we decided to walk off the back of old baldy. We walked off to the left (looking out) and found a series of cairns marking a path back to the halfway ledge through a series of little slot canyons. 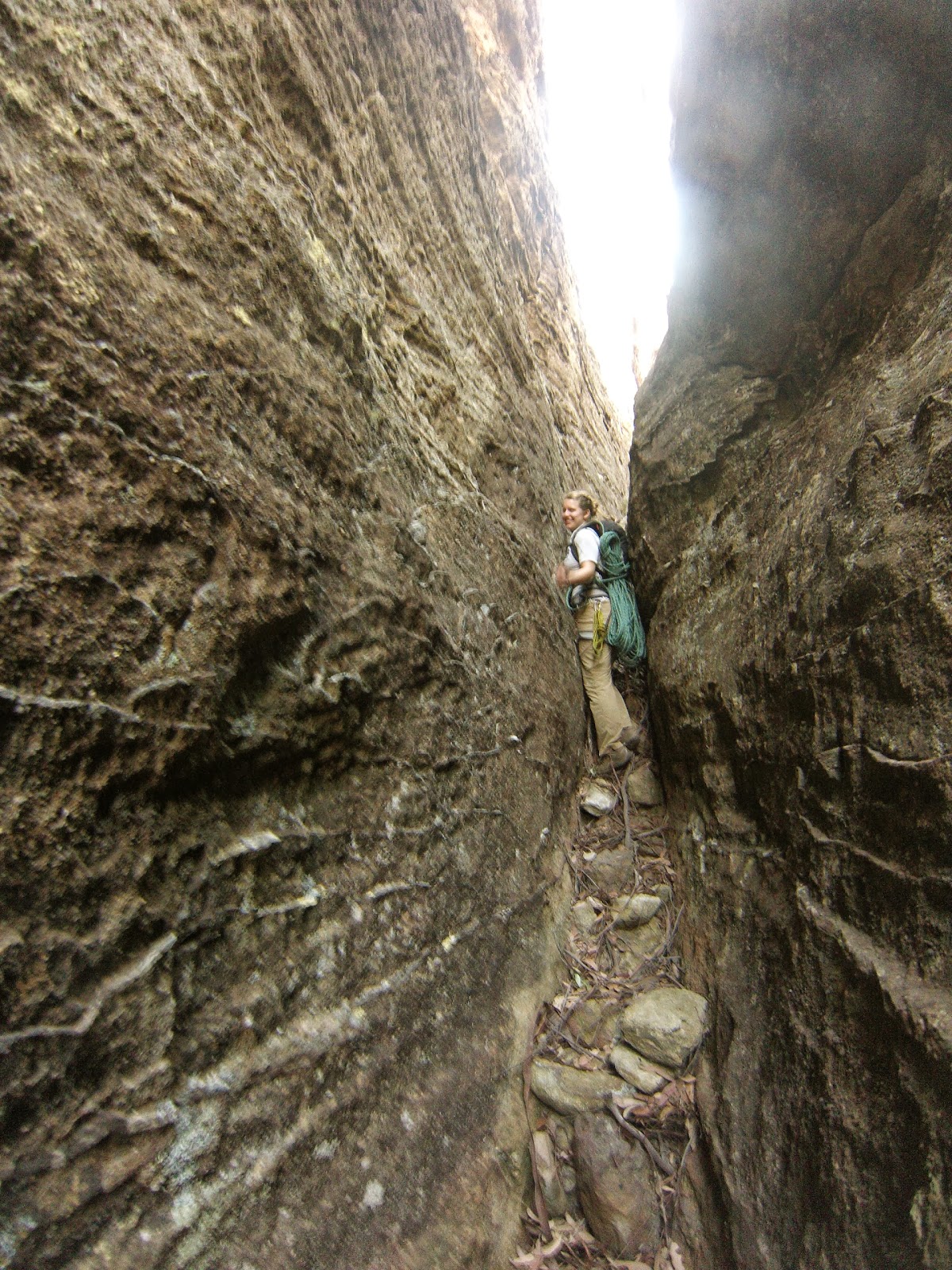 Squeezing through these little slots was fun. The cairns petered out at the halfway ledge, and the few possible trails that we tried ended at cliff faces. There's probably a safe walking trail to the valley floor, but we couldn't find it. (I'm guessing the walk back to the valley traverses the halfway ledge?). We had spent some time looking at all the little slot canyons, so It was getting uncomfortably close to sunset. We decided to make our way back along the halfway ledge to find the abseil anchors at the top of Secret Swinger. After one 55m rap, we were on the ground and on our way back to the tent.

We made it back to camp just after sunset, with headlamps shining and with hexes clanging. The neighboring camping party had been worried about us when we hadn't returned by dark, so the kids ran over to greet us when their heard our clanging. It was adorable. Even better, their parents invited us to share their dinner of salad, stew, pasta, and fancy chocolates around a campfire. Carrie and I were touched by their friendly hospitality, and we thoroughly enjoyed relaxing by the fire and eating a good meal with new friends. We even got to hear part of the kids' bed-time stories- James and the Giant Peach. It was an unexpected by entirely pleasant ending to our day.